Tottenham Hotspur have unveiled their new away kit for the 2020/21 Premier League season.

Spurs have entered the fourth year of their exclusive deal with Nike, which is reportedly worth £450m.

And the release of the away shirt has received mixed reactions.

It is easy to see why as the jersey is predominantly a dark green colour with black and pink stripes down the sides.

Don't get me wrong, green kits are hardly a crime against humanity, it is just a colour that isn't commonly associated with Spurs.

Tottenham have produced some of the best retro football shirts over the years including the 1991/1994 away strip.

However, green was the colour of the Tottenham third kit during the 2018/19 season - famously featuring during their remarkable run to the Champions League final under Mauricio Pochettino last year.

Pochettino's side beat Manchester City and Ajax with away goal wins en route to a showdown with Premier League rivals Liverpool, only to agonisingly fall short at the final hurdle.

Be that as it may, this design is a big deviation from the bright and bold blues and yellows of the past, and it hasn't gone down well with everyone.

Once again the sponsored shirt features a round neck with yellow trim and pink inside the rear of the collar.

At first glance, it seems to be nice and simple, but the further you delve into the design the quicker you realise it is far more complicated than it first appears.

For whatever reason, it looks incredibly disjointed, with the lateral zig-zag stripes on the sides bizarrely cut short before the bottom of the jersey.

Shirt sponsors AIA signed a new lucrative deal with the Lilywhites last year which is reportedly worth £320m and has extended their agreement for another eight years until 2027.

Spurs are earning £40m a year as a result and this has put them level with London rivals Chelsea who teamed up with Yokohama tyres in 2015.

Furthermore the contract has covered some of the costs of signing new players in the transfer window while Daniel Levy wrestles with the loan repayments for their brand new £1bn stadium.

As it stands, Levy is still looking to sell the naming rights to the 62,000-seat arena, which is officially known as the Tottenham Hotspur Stadium.

Considering the sum of money involved it is hardly surprising that the life insurance company's logo is plastered across the front of the jersey.

However, slapping a huge symbol for all to see detracts from the overall design of the shirt, as the text feels out of place alongside the club's crest and Nike emblem.

On the other hand the shorts are actually the best part of the outfit.

While that isn't saying much, the black background works well with the pink stripes running down the sides.

It should be hard to mess up socks, as, well, they're socks, but the kit manufacturers have done a great job of doing just that anyway.

The socks go back to the dark green but feature a pink ring around the top as well as a pattern on the sole of the foot that resembles a thumbprint at best.

As you can probably guess, that pattern cannot be seen anywhere else on the away kit.

Without sounding too harsh, it appears as though the kit designers decided to blend together a whole bunch of different designs and it hasn't worked out as well as planned.

Whether or not this shirt will stand the test of time remains to be seen.

At least the home strip doesn't make the club the laughing stock of north London.

The funky shirt stands out from the rest of the crowd with a cool and unique look which distinguishes itself from the away kit.

With that being said, the blue armbands are a bit of a stretch too far in the wrong direction.

Although it is fair to say we aren't the biggest fans of the design, it could easily become a collector's item in the years to come, so supporters will not want to miss out. 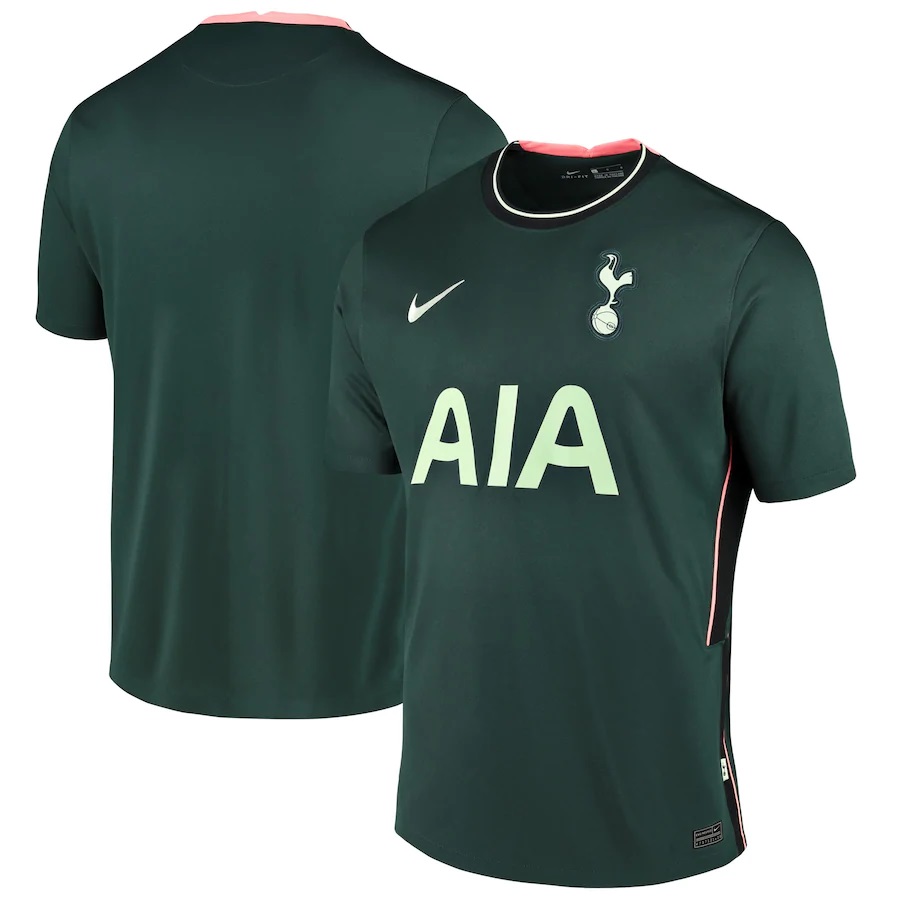 Show your support for Spurs in style with the brand new away shirt!

Jose Mourinho's side are going to need all the help they can get ahead of next season. What better way to show your Spurs spirit by buying one of the away shirts?

Tottenham will welcome Everton to north London when the top flight returns in September.

Spurs have already signed Pierre-Emile Hojbjerg from Southampton and are expected to make further additions before the transfer window closes at the beginning of October.

If this product didn't take your fancy, why not try the Tottenham Hotspur fan gifts page to find some more ideas!