18 August 2020
England
For Kids
Football Fan Gifts is a participant in several affiliate programs, including the Amazon Services LLC Associates Program. Read more.
In This Post

We wanted to take a dive into England’s history in a slightly different way to normal. The Three Lions may have won the World Cup back in 1966, but wearing a fashionable kit was never the priority.

Now, however, producing exciting kit designs is expected from fans. Prices have increased over the past two decades and the quality has as a result. Designers spend hours upon hours of their time trying to piece together the perfect kit to please every fan - a task easier said than done.

Since the glory days of 1966, England fans have been starved of success; the most recent achievement being reaching the 2018 World Cup semi-finals.

Prior to the semi-final defeat to Croatia, fans across the country have had little to shout about. Gareth Southgate has started to transition England into a young, frightening prospect; the likes of Phil Foden, Jadon Sancho and Mason Greenwood being prime examples of exactly that.

Despite lacking accolades from on-field performances, the Three Lions have created some excellent kit designs and we wanted to take a closer look.

So, we decided to compile a list of the top five junior England football kits produced in recent history:

Designed by Nike, this stylish, simplistic football kit was a thing of beauty. The matching colours of the collar and sleeves pieces this together excellently. 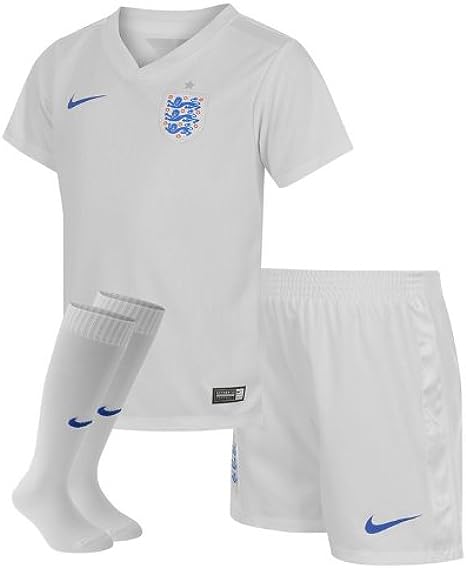 The best of the bunch, this is the perfect gift for every young England fan!

The gold touch with the badge was a welcome addition; despite poor performances on the pitch at the 2014 World Cup, this England football kit was very neat.

One year before the aforementioned 2014 home shirt and the quality was equally as impressive. The red shirt and socks coupled with white shorts blend together and despite only being used twice by the England squad that year, it was an outstanding design. The buttoned collar was a simple, yet effective addition and overall, this is one of England’s better kits in recent history.

Everyone remembers 2010 for that Frank Lampard strike, but what people tend to forget is the sheer class of England’s football kit that year - especially the home design. The all-white attire coupled with red numbers on the front was unique and delivered something different to normal. It was a World Cup to forget in South Africa but the football kit was beautiful.

The 2017 away kit for England took a different turn from recent years. With Nike responsible, the designers opted for navy blue instead of red and produced an excellent shirt. Almost resembling a training top, the simplicity of the design is what makes it so captivating; one of England’s best kits produced in the last decade.

It may have been produced over 15 years ago, but the 2005 home kit was a masterpiece. With the likes of David Beckham, Joe Cole and Wayne Rooney wearing the shirt, it added to the quality. The design itself was cross-shoulder and the red lines coupled with the white base blended together excellently. Overall, this kit remains one of England’s finest in terms of appearance.