Top 10 Retro Chelsea Shirts to Buy - Home and Away

Starting off with a classic - in 1994, the Blues teamed up with Le Coq Sportif to create this memorable shirt. For one of the first times in the clubs history, they had red subtly added to their kits. This shirt features two shades of blue, as well as red and white accents displayed horizontally and across the neck. Although this shirt did not bring the Blues much luck on the field, it certainly cannot be overlooked for your collection - you do not want to miss out on this retro Chelsea shirt! 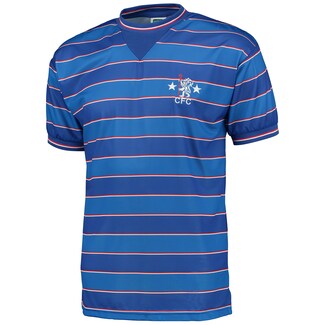 Show your support for your favourite club with this iconic strip - Blues fans, this one is for you!

Chelsea switched it up for their away version of their 1984 home shirt - with a distinct ‘lemon sherbet’ colour. This is not a retro shirt which you see everyday, that is for sure! This has to be one of the greatest retro Chelsea shirts in history and there will never be another shirt like it - a MUST have in your collection. 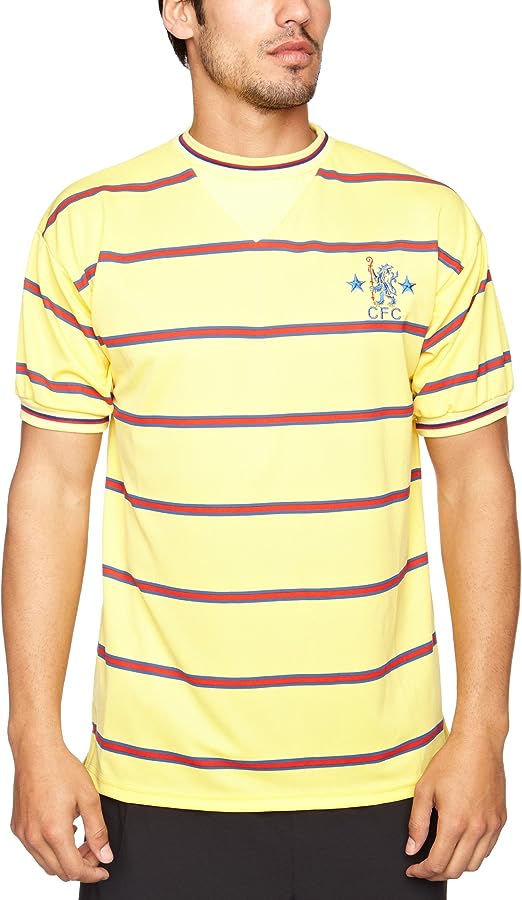 This is one of those football shirts you can get away with wearing for any occasion - do not miss out!

A more of a historic piece is this bespoke 1997 shirt which the Blues wore during their 2-0 FA Cup Final victory against Middlesborough. It famously features the iconic Chelsea lion crest which has the details of the final printed above. This shirt is also very special as it features the crest across the shirt in a darker shade of blue, as well as a white and blue collar with yellow highlights. 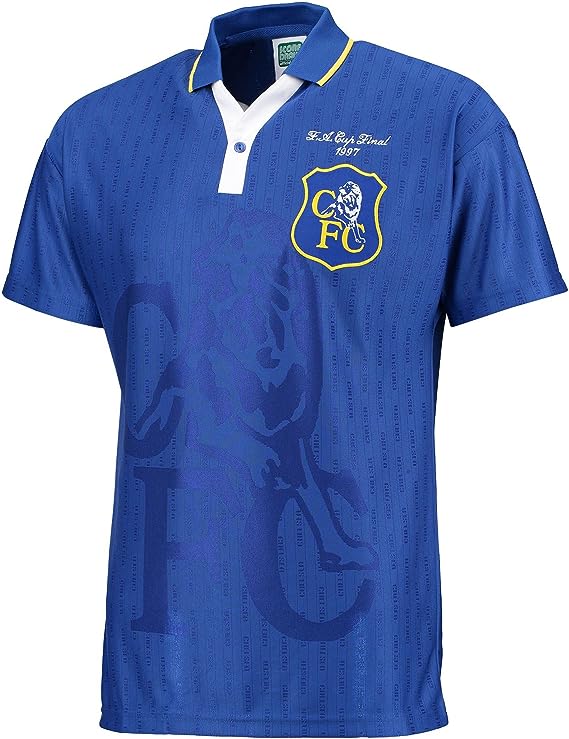 Retrace the steps of Ruud Gullit and Roberto di Matteo by buying this cult classic.

It was specifically worn during the 116th FA Cup final which took place on 17 May 1997 at Wembley Stadium, in front of almost 80,000 spectators. Chelsea came out as 2-0 winners which meant they had won the domestic trophy for a second time, 27 years after their first triumph. Many people will remember this final by Roberto Di Matteo’s goal scored just 42 seconds after the whistle. Di Matteo received the ball early on, and fired it into the goal off the crossbar from 25 yards out to record the fastest ever goal in a Wembley FA Cup Final - this record stood for 12 years until Louis Saha scored just after 25 seconds in the 2009 final.

A classic home shirt which will be remembered by many Chelsea supporters from their Second Division title winning campaign. The Blues were relegated from the top flight in 1988, before bouncing straight back up to reclaim their position in the First Division with this iconic shirt. This shirt features a white grid pattern, and Umbro switched things up with the addition of red to their lion crest - a piece of history which you cannot miss out on! 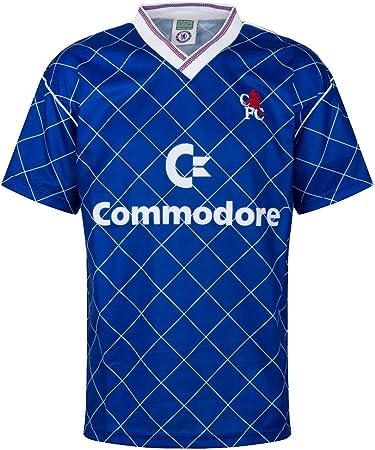 This slick and stylish shirt is perfect for all ages - get it in time for game day!

This away shirt also brings back great memories from their promotional year. Red is one colour which you would not commonly associate with Chelse; however, they pulled it off with these slick red, white and notable blue stripes. You got to add this retro Chelsea shirt to your unique collection - it is definitely one of their greatest away shirts in history! 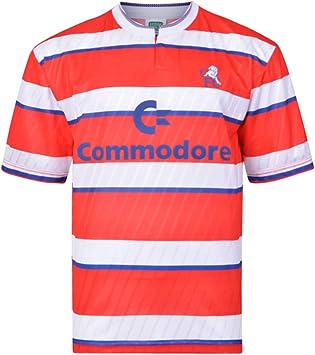 An essential shirt for all ages, this classic will bring back a lot of great memories - make sure you don't miss out!

Originally manufactured by Umbro during the rise of the Premier League, this popular Chelsea shirt features a red inner collar along with the memorable Amiga sponsorship displayed across the centre. Once again, Chelsea opted for red details across their iconic blue shirt, and has proven to be one of the most popular retro Chelsea shirts amongst modern fans. The collar really places this shirt in a league of its own and it is a must add to your collection without a doubt! 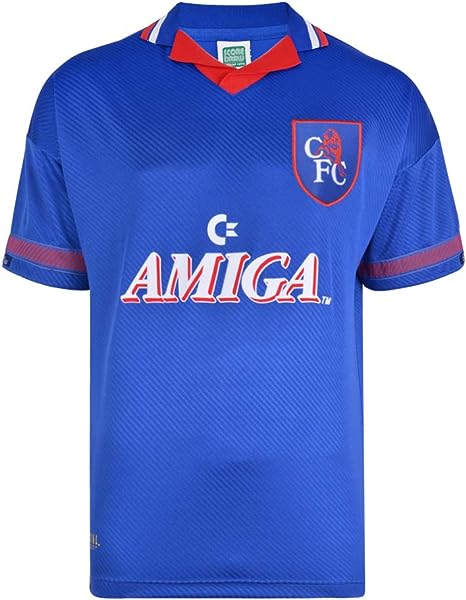 In with the old, out with the new, show you're a true blue with this iconic strip!

Get this 1992 home shirt now - as worn by Chelsea legends during the first ever Premier League season! ‘CFC’ is uniquely printed across the shirt which is a detail you do not commonly see on shirts today. It features a white collar along with kit sponsors ‘Commodore’ printed in solid white which really makes it sleek! 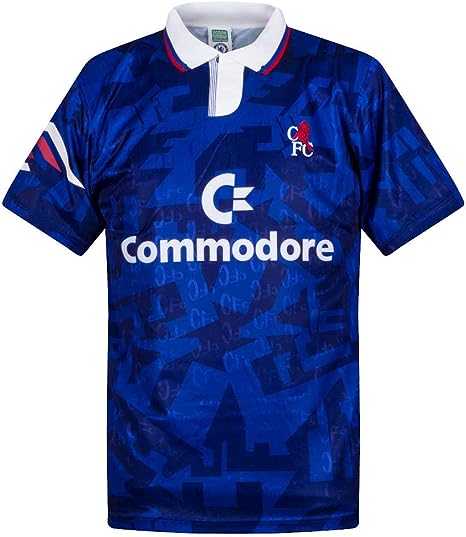 Stand out from the rest of the crowd with this vintage apparel which oozes retro appeal!

One of, if not the most iconic third shirts of all time! It has to be one of our favourites too, we bet you did not even know this one existed. It simply features two bold red and green stripes on top of a plain white shirt, placing it in a league of its own! 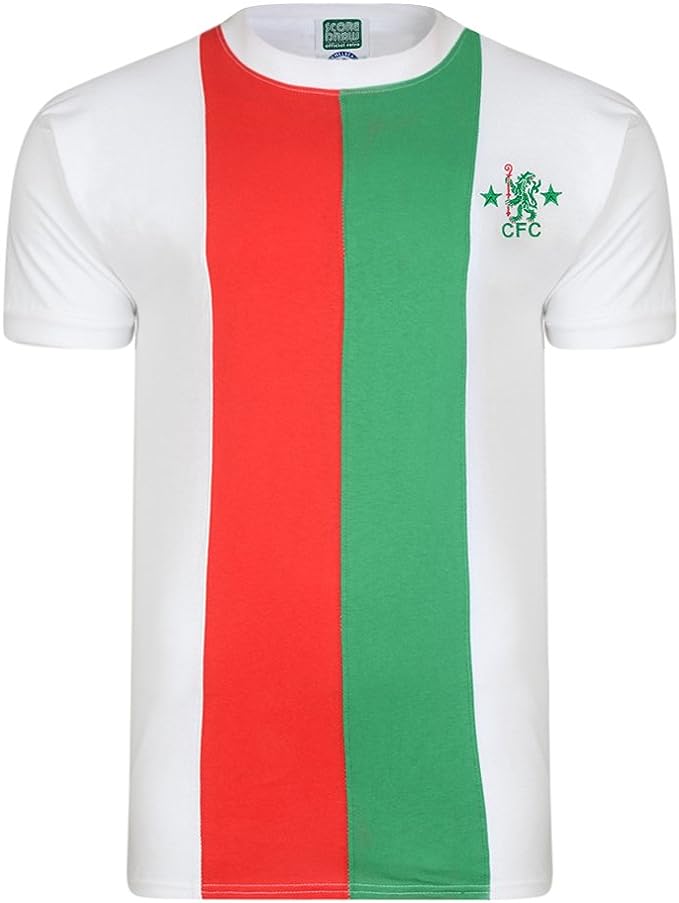 This does not look like your typical Blues shirt; however, it was way ahead of its time - you cannot miss out on adding this special shirt to your collection of retro Chelsea shirts.

To celebrate their UEFA Winners’ Cup triumph against Stuttgart in 1998, the Blues wore this one of a kind shirt with details of the final famously printed above their historic badge. This retro Chelsea shirt was worn at the Rasunda Stadium in Stockholm, in front of over 30,000 spectators. At the time this was Europe’s second largest football competition, and both clubs had to play a total of eight games in four stages in order to advance to the final. 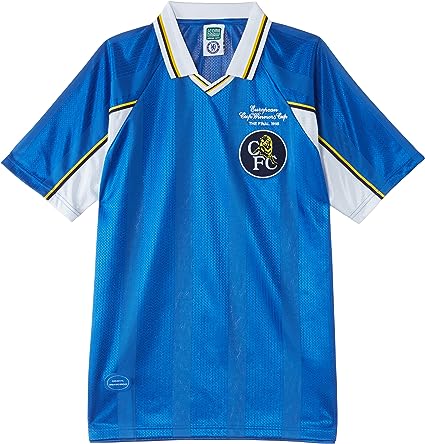 The shirt features the iconic blue and white Chelsea colours, with slick yellow and black trims. Prove you're a proper Blue with this piece of history!

Chelsea went on to win the match 1-0, as Gianfranco Zola scored the winning goal in the second half. This meant that Chelsea had won a cup double during that season, having previously won the League Cup earlier in their campaign. This was only the second time that the Blues had triumphed in this competition, and as a result they gained qualification for the 1998 UEFA Super Cup which they also went on to win after defeating Champions League winners Real Madrid 1-0.

To conclude our top 10 retro Chelsea shirts, you still may be looking for a simple timeless classic which you can wear at any occasion. We think you will love this one if you are after a clean shirt with minimal detailing. It features the 1970 FA Cup trophy next to the Blues original lion crest. This retro Chelsea shirt has a great backstory to it! The 1970 FA Cup Final was contested by Chelsea and Leeds United at Wembley Stadium. This match famously ended 2-2, which made it the first FA Cup Final to go to a replay since 1912. As a result, the replay was played at Old Trafford almost three weeks later, and after four hours of battling, Chelsea eventually ended up as 2-1 winners. 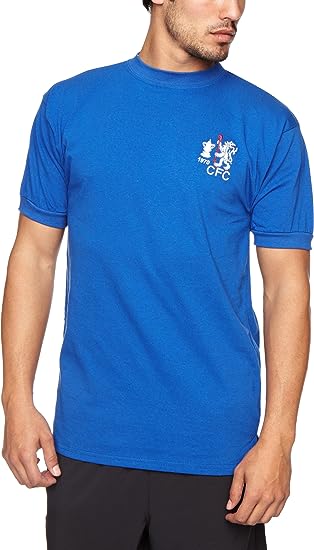 Your collection is not complete without this shirt, and if you did not also know, Chelsea’s 50th Anniversary Kit is based on this supreme shirt - you have to add this one to your collection!

This final also came with great bragging rights for the Blues as Leeds finished the First Division in second place in front of Chelsea in third. At the time, the FA Cup replay attracted a British television audience of more than 28 million which was the second highest UK audience for a sports broadcast, just behind the 1966 World Cup Final. Many fans across the world will remember this iconic shirt and you can become a part of Chelsea’s history too by purchasing it now!

If you didn't find what you're looking for, make sure to check out the Chelsea fan gifts page for more ideas!