Tottenham Hotspur famously became the first English team to win the FA Cup for a record eighth time after defeating Nottingham Forest, 2-1 at Wembley. 80,000 spectators witnessed the 110th FA Cup Final in history, as Nottingham Forest made their first final appearance since their trophy win 32 years earlier. However, one thing notably stood out during the night and that was the Spurs 1991 FA Cup Final shirt which was designed specifically for the match. 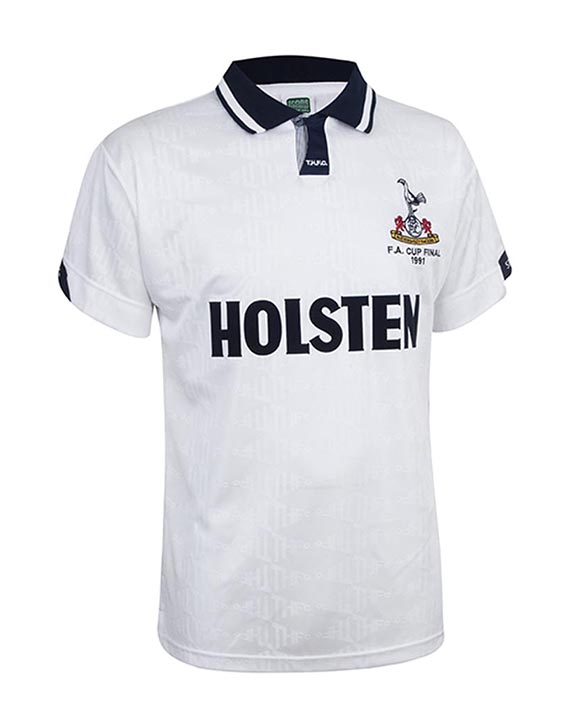 You will quickly become the 'pride of North London' once you get your hands on this one-of-a-kind Spurs shirt!

Spurs wore this immaculate slick shirt during 120 minutes of triumph and tragedy at Wembley. The Holsten sponsored shirt was manufactured by Umbro who took over from previous manufacturers Hummel ahead of the final. It has the qualities of a classic white Spurs shirt, though distinctly features a dark blue collar for the first time in the clubs history. The only previous collared shirts had been all-white, and this is one reason as to why the Spurs 1991 FA Cup Final shirt really stands out from the rest. Despite the blue collar and detailed print of the shirt, one feature really makes it unique and a must have for your collection - “FA Cup Final 1991” is printed beneath Spurs’ famous crest. This minor detail really places this shirt in a league of its own and is instantly a piece of history - you cannot miss out on becoming a part of history yourself with this Spurs 1991 FA Cup Final shirt!

This shirt has a great backstory to it which cannot be overlooked. Just 16 minutes into the final, Forest were awarded a free-kick on the edge of the 18 yard box after a challenge from Paul Gascoigne. Gazza was unpunished; however, he got out of the tackle worse off than his opponent and subsequently received extensive treatment on his knee before the restart where he made it up to join the defensive wall. Many spectators and opposition players called for him to be sent off for his challenge, though karma came around quickly as Stuart Pearce slotted in the free-kick through a gap in the wall to give the Reds the lead. Unfortunately for Gazza, he was forced off the field via a stretcher shortly after the goal, as he could not put any weight onto his bad knee. It was later revealed that Gazza had torn multiple cruciate ligaments in his knee which ruled him out for the whole of Spurs’ next season, as well as the 1992 European Championships. Sadly, it also proved to be his last ever game played for Tottenham.

The eventful final continued soon after, when Gary Lineker had a goal disallowed for being offside which was later revealed to be the wrong decision. Albeit, five minutes later Lineker was brought down by keeper Mark Crossley inside the box which resulted in a penalty awarded to Spurs. Lineker stepped up to the spot and fired the ball right into Crossley’s left-side where the Welshman kept it out - becoming only the second goalkeeper ever to save a penalty in an FA Cup Final. Shortly after the half-time interval, Paul Stewart put Spurs level with a low-driven shot past Crossley into the corner of the goal.

The final finished at 1-1 after normal-time, and therefore moved onto extra-time. Just four minutes into extra-time, Spurs were awarded a corner - Nayim took it and Stewart flicked it on at the near post towards Mabbutt who ran in at the far post, but he was beaten to it with Forest defender Des Walker knocking the ball past his own keeper to give Spurs the lead for the first time in the final. After a nervous half-an-hour, Spurs managed to hold on to their 2-1 lead and went on to win the FA Cup for a record eighth time. This record has only been surpassed by Arsenal and Manchester United, and Spurs have not managed to win or even reach the final of the FA Cup since this iconic victory in 1991.

Spurs had quite a tough cup run, they started off in the third round as 1-0 winners at Blackpool, soon followed by a 4-2 home win against Oxford United. The fifth round saw Tottenham scrape past Portsmouth away by two-goals-to-one, and the same result was achieved at home against Notts County in the quarter-finals. Spurs were drawn against North London derby rival - Arsenal, and there was lots of hatred towards each other which made Spurs’ 3-1 victory over the Gunners ever so sweet. To go on and win the trophy really was a kick in the face for Arsenal, though Spurs were in desperate need of the win as they were more than £20m in debt at the start of the season.

If this Spurs 1991 FA Cup Final shirt did not catch your eye, be sure to check out our top 5 gifts to buy Spurs fans this year here!