Much has been made of Mike Ashley's ongoing battle with the Premier League after the club claimed a takeover by a Saudi-led consortium was unfairly blocked by the authorities.

Now Newcastle United have unveiled their new home, away and third shirts for the 2020/21 season.

The Magpies wore the latest home kit for the first time on the final day of last season against Liverpool at St James' Park.

And Puma have gone back to basics as you will no doubt find out later on.

Steve Bruce's side have made some shrewd signings, including former Bournemouth stars Callum Wilson and Ryan Fraser, as well as Jeff Hendrick and Jamal Lewis.

Summer spending is not expected to stop there so fans should keep a watchful eye on the wheeling and dealing still to come in the transfer window.

The classic black and white stripes are synonymous with NUFC and Newcastle upon Tyne.

Geordies must get their hands on the fresh Puma kits for the new campaign - you do not want to miss out!

For the most part Puma have pulled it out of the bag with this Newcastle home kit.

And they have toned the strip down a little with thin vertical stripes. 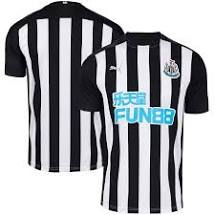 Show your support for your favourite club with this slick and stylish home shirt!

However we do have one pretty major pet peeve. The sponsor takes up far too much space for our liking and is just such an eyesore. I mean, just look at it!

Whether or not a takeover will go through remains to be seen but either way this is a big step in the right direction nonetheless.

Now this is more like it! Who doesn't love a fluorescent football shirt?

Bruce's Black and Whites will be wearing yellow on the road for the first time since 2013/14, with a textured vibrant lemon colour covering both sides, and a dark blue stripe across the shoulders.

Wear your passion with pride with the latest away kit!

While the away shirt could easily be mistaken for a Toxic Waste, we think it is the Bee's Knees.

In fact we will even go so far as to ignore the ugly Fun88 logo on the front. Full marks from us.

As is tradition with the third kits, clubs have the license to go a little crazy and oh boy, Puma did not disappoint. 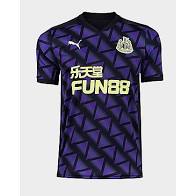 This third shirt is a must-have for fans of the Toon Army.

This third shirt is covered in a simple triangular prism pattern, complete with glow-in-the-dark logos and a club crest.

The bold and bright design is based on the steelworks of the iconic Tyne Bridge.

While it has received mixed reviews from the Toon Army we must admit we are rather fond of it ourselves.

If you don't like the new kits, take a look at our Top 5 Football Gifts To Buy Newcastle United Fans This Year instead!