Manchester City have revealed their home, away and third kits for the 2020/21 Premier League season.

As is often the case the Citizens have spared no expense with the shirts this season whilst paying homage to the city of Manchester at the same time.

Pep Guardiola's side have spent lavishly this summer, having signed Ferran Torres from Valencia and former Chelsea ace Nathan Ake from Bournemouth, while they continue to be linked to Napoli's Kalidou Koulibaly.

City finished Premier League runners-up to runaway leaders Liverpool last term and they will be determined to make amends.

The club replaced Nike with Puma in a kit deal last year. The terms of the agreement have not been disclosed but it is believed the deal could be worth up to £65m-a-year for ten years.

Fans do not want to miss out on buying these Man City football shirts before it is too late as they could turn out to be a collector's item in the future!

City unveiled their new home kit earlier this summer and the bright and bold blue design is heavily inspired by the city's iconic Northern Quarter.

The strip features the club's distinctive light blue colour with a mosaic pattern underneath and is complimented by white shorts and matching socks. 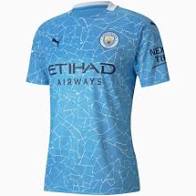 Show your support for the Citizens with this slick and stylish strip!

If you're a Disney fan as well as a City fan then this shirt is certainly for you as the kit looks like it belongs in a scene from Frozen.

One thing is for sure, City fans will not want to 'let it go', as this could become an important piece of the club's history over the course of the campaign.

Once again the new away shirt sports a pattern "inspired by the city's architecture, landscape, music and arts."

Wherever you are in the world, you will appreciate this slick and stylish strip. 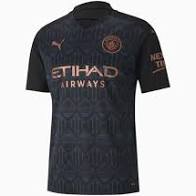 Wear your passion with pride every time you wear this away kit!

The dark blue and black base with copper detailing immediately catches the eye. Quality.

The double knit material is entirely made from 100% polyester with a bio-based wicking finish.

In a now-deleted tweet, Liam Gallagher was left disgusted by the new design and wanted the designers to be "sent to Wuhan."

As far as we are concerned we think this is a little bit extreme from the former Oasis frontman.

In fact we'd wager he would have worn this pale paisley print in the past. You could probably get away with wearing this at Glastonbury. 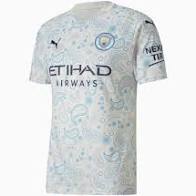 Let everyone know where your loyalties lie wearing the latest third shirt!

Puma have pushed the boundaries with the City third kit and the results are there for all to see.

Put it this way, it is miles better than the monstrosity they created last season, anyway.

If you couldn't find anything you would like to buy, check out our Top 8 Manchester City Fan Gift Ideas instead!