Leeds United's long-awaited return to the Premier League after a 16-year absence away from the top flight was confirmed with two games of the 2019-20 Championship left to play.

Marcelo Bielsa's side are now back where they belong and boy have they looked like they are making up for that lost time very quickly.

After losing a dramatic 4-3 defeat to Liverpool at the start of the season, Leeds left Anfield empty-handed, but the Peacocks will have been filled with plenty of hope as they made their way back across the Pennines due to the fact they came so close to putting the defending champions to the sword so far away from home.

And Andrea Radrizzani has been busy in the transfer window as well, signing Rodrigo from Valencia, Illan Meslier from FC Lorient, and German international Robin Koch from SC Freiburg.

The Leeds chairman has shown a real statement of intent by bringing these new signings to Elland Road and fans will be hoping they can reap the rewards on the pitch.

Leeds have once again teamed up with Adidas to supply their home, away and third kits for the 2020/21 season.

Leeds fans do not want to miss out on these brand new football shirts - get yours now before it is too late!

We know, we know, how is the new Leeds home kit any different from the designs of its predecessors?

Well, let me tell you, there is more to this shirt than meets the eye.

First of all, if you ignore the sponsor for a second, you will notice that Adidas have got rid of the gold of the campaign last and replaced it with an understated blue colour. Out with the old and in with the new!

In fact, upon further inspection you will also be able to spot the blue bars on the shoulders. 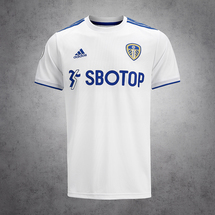 Show your support for your favourite club with this slick and stylish home shirt!

There is just something so satisfying about keeping a kit nice and simple.

You can't really go wrong with a white and blue combination so we have a feeling that this football shirt is one for the collection.

Now then, this is more like it! Leeds aren't really known for wearing green and blue but back in the day this would have gone down a real treat with the LUFC faithful.

Perhaps the club have been paying attention more than some may think...

According to their official website, the Leeds United away kit pays tribute to one of the greatest players in the club's history; Tony Yeboah himself. 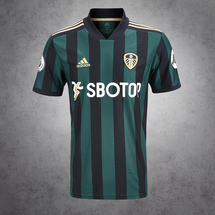 Wear your Leeds pride wherever you go with the latest away shirt!

The Ghanaian striker famously scored a match-winning volley against West Ham on the opening day of the 1995/96 season and a hat-trick against Monaco in the UEFA Cup wearing one of these blue and green striped shirts.

Whether or not Patrick Bamford will be able to do the same in one of these away kits remains to be seen but he has certainly started in the right direction!

Not interested in either of these Leeds United kits? Have no fear - check out our tier list of Every Premier League Ranked From Best To Worst instead.