Burnley FC have released their brand new home and away kits before the start of the 2020/21 Premier League season.

Although Burnley's style of play isn't always the sexiest, Sean Dyche's side have started to make a name for themselves over the years for their shrewd tactics.

By the time Burnley revealed their new kits they had already been leaked via Panini cards.

Not exactly the sort of PR stunt that fans had in mind but it is quite funny the more you think about it (with the benefit of hindsight).

The Clarets have kept Umbro onboard as the club's official kit suppliers and once again the betting company Love Bet features on the front of the shirts.

Fans must buy these Burnley football shirts before it becomes too late - you will not want to miss out!

Alright, we get it, it looks like every other Burnley kit ever created, but that's basically the point.

Burnley's new home kit pays homage to some of the greatest players in the club's history over the past 100 years - the 1920/21 First Division champions. 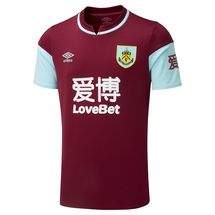 Show your support for Sean Dyche's side with your favourite combination of claret and blue!

The famous claret and blue is complimented by white shorts and matching socks.

Burnley went 30 games unbeaten during the 1920/21 season. Whether Sean Dyche's side will be able to emulate this impressive run remains to be seen.

If we're being particularly picky, the collar has a V-shaped cut in the centre, which if we're being brutally honest, looks a little bit strange.

And the betting sponsor is simply far too in-your-face for a shirt of that size. Here at Football Fan Gifts we call that a crime against humanity.

With that being said you can't really go wrong with claret and blue, can you?

Now then, this is more like it! Burnley claim they have headed 'black to the future' with their away kit and it is easy to see why. 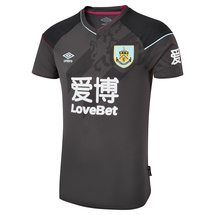 Wear your Burnley passion with pride everywhere you go with this away shirt!

This slick and stylish away strip stands out from the rest of the crowd with the bold black, grey and white design.

Umbro have incorporated the old club crest worn by past Burnley legends into the pattern in a nod to the past.

And the claret and blue streaks on the V-neck collar and sleeves are also seen on the away shorts which are worn with black socks.

As far as we are concerned Umbro have done a much better job with the away kit.

For fans who don't like the home kit this one is definitely for you!

It is perhaps hardly surprising that Burnley still haven't given fans a sneak peek of their third kit despite the fact the new season already started several weeks ago.

But rest assured we will drop a review as soon as they do (or if it gets leaked again).

Keep it on the down low though, we wouldn't want to get ourselves in trouble anytime soon...

If you didn't like anything on offer, why not try our Top 5 Football Gifts To Buy Burnley Fans This Year instead!