Premier League clubs across the country are rolling out their new kits ahead of the 2020/21 campaign.

Brighton & Hove Albion FC went one step further by releasing their brand new home kit before the end of last season and wearing it during the win over Burnley on the final day.

And Graham Potter's side also wore their away kit for the first time in a pre-season friendly against Chelsea at the Amex Stadium.

Brighton extended their deal with Nike for another three years in 2019 and the US sportswear giants have started from scratch once again this season.

Albion ambassador Bobby Zamora told the club's official website “I love the new strip. I was surprised when I first saw it on the video shoot, but it looks absolutely stunning."

The club legend made a cameo appearance in the launch video which you can check out down below.

Albion fans will not want to miss out on the new Albion home and away football shirts - get yours now while stocks still last!

Out with the old, in with the new. The Seagulls have got rid of the traditional bold stripes and replaced them with a slick and smart design.

It just ticks all the boxes, doesn't it? The ultramarine blue background is complimented by the white wide brimmed collar which works so well with the white trim on the short sleeves. 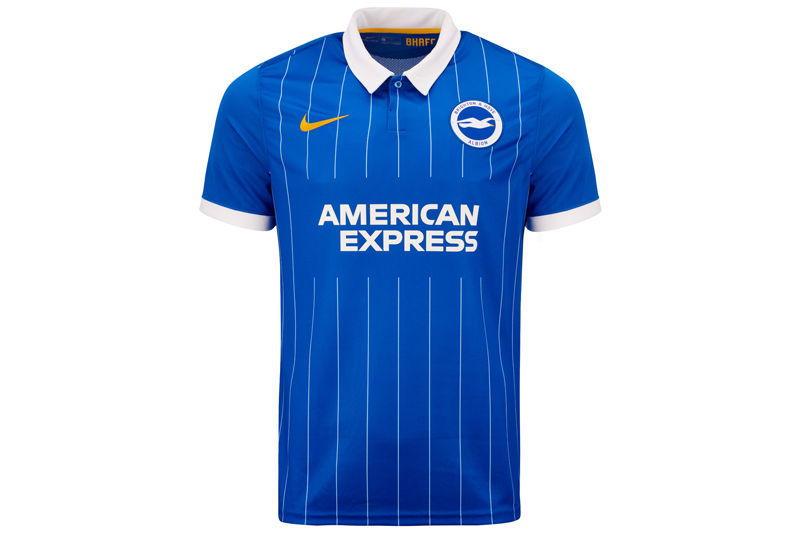 Show your support for your favourite South Coast club with the new home shirt!

Nike have taken inspiration from patterns previously used in the past with a blue base and white pinstripes.

The Brighton home shirt which is worn with white shorts and blue socks also sports a yellow trim on the side seam.

Fit for every occasion, it looks like one you could get away with wearing on a date or in a nightclub. Why not both? Full marks from us.

For some reason retro shirts are all the rage at the moment.

And Nike have paid tribute to the classic away colours of the Albion by returning to their roots. 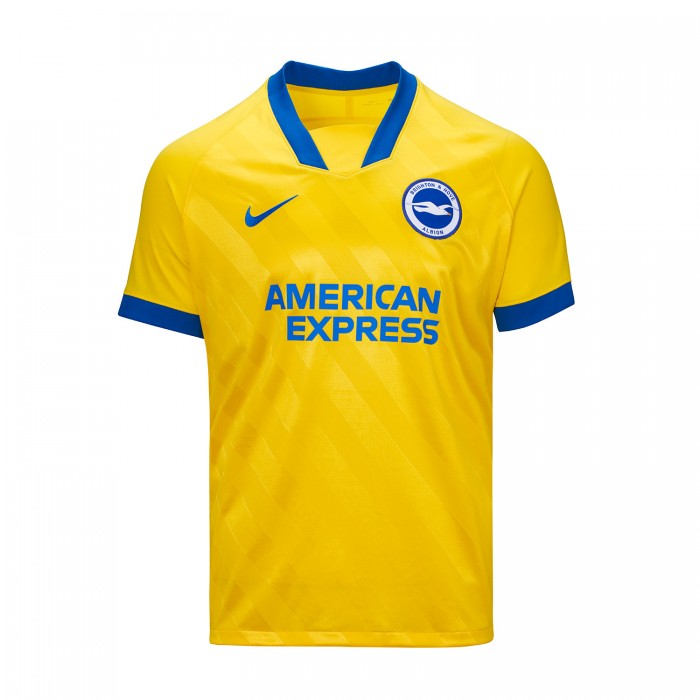 Wear your passion with pride wherever you go with this epic Albion away shirt!

The Brighton away shirt is inspired by a similar strip worn in the 1980s and will mark the first time the first team have worn a yellow away kit since the 2013-14 season.

Made from a smooth sweat-absorbing fabric means this kit will keep you nice and dry when you work out in the gym.

The yellow base is highlighted by an oversized blue collar and blue swoosh that makes the shirt look slick and stylish.

Albion will wear blue shorts and yellow socks with the away shirt to complete the new look. Quality.

Now this is where things get a little bit more interesting.

Nike have gone for a subtle and sleek style for their third kit - which will be worn when Brighton's other colours are too similar to their opponents - and it looks like something straight out of a James Bond movie.

The third shirt looks like the type of kit you can get away with wearing in the gym - grab it now while you still can!

While the Brighton third shirt is nowhere near as bright and bold as its counterparts we think it is a real beauty.

If none of these football kits caught your fancy, check out our Top 5 Football Gifts To Buy Brighton & Hove Albion Fans instead!