It is that time of the year again. Premier League clubs have started showing off their brand new kits before the beginning of the 2020/21 season.

Arsenal FC reunited with Adidas last year as they kicked things off in style with a simple design. This trend looks set to continue, although Adidas have added a surprise twist to the Arsenal home and away shirts.

Mikel Arteta's side added the FA Cup and Community Shield to the trophy cabinet during his first year at the helm of the Emirates and big things are on the horizon.

You will not want to miss out on buying these Arsenal football shirts before it is too late because they could become a collector's item in the years to come!

Both shorts share a similar design but they use different colours, along with the socks which feature triple lines at the top, although the two kits show the Emirates logo in the same place.

The Gunners also offer versions of the shirts worn by the pros on the pitch which you can purchase from the club's official store.

The kit manufacturers have made a slight change to the traditional red shirt with white sleeves by adding a bold triangular pattern to the base.

And Adidas have also paid tribute to Arsenal's geometric crest which the Gunners used during and after World War II. 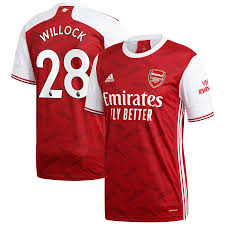 Show your support for the red side of North London with the brand new home shirt!

Every once in a while, Arsenal drop an absolute banger, and this is one of the best-looking football kits we have seen in a long time.

As is often the case the Emirates logo is not hard to miss but it is not exactly an eyesore either. In fact it works rather well with the rest of the shirt as the text is the same colour as the sleeves.

This innovative kit won't look out of place on the beaches of Magaluf - make sure to get yours while stocks last!

From one of the best football shirts in recent memory to The Rocky Horror Picture Show... Okay, maybe not quite, but the point still stands.

The away kit has received mixed reviews from Arsenal fans on social media so far and we don't need to tell you why - why not see it for yourself! 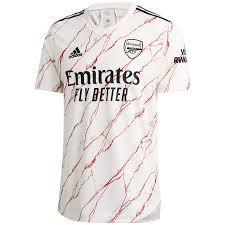 Wear your passion for the Gunners with pride wherever you go while wearing this away shirt!

We know what Adidas were trying to replicate but they have really missed the mark on this one.

Arsenal's old home Highbury was famous for its marble hallways whereas this shirt looks like something straight out of a CSI crime scene.

To some extent the new kit has recreated the polished marble in maroon on white with a black trim.

With that being said it could be a lot worse and the 2020/21 away kit may be worth quite a lot of money in the future so fans should seize the opportunity while they still can.

If you aren't interested in any of these kits, take a look at The Top 5 Football Gifts To Buy Arsenal Fans This Year to find some more ideas!